LANSING, Mich. — The Senate Elections Committee on Wednesday heard testimony from local clerks across the state frustrated by a lack of communication and rushed decisions by the secretary of state, which some say threaten election integrity.

“We truly have some of the best clerks in the entire country, and they are the ones who best know and understand the needs of their communities,” said Sen. Ruth Johnson, who served as Michigan secretary of state from 2011 to 2018. “Our system is decentralized by design and offers direct accountability between voters and the local clerks who are on the frontlines conducting our elections. Clerks are the voters’ advocates, and I want to be their advocate.”

The hearing follows the unsolicited, statewide mass mailing of absentee ballot applications by the secretary of state that has been plagued by applications sent to individuals who are dead, moved to other states, are noncitizens, or not of legal voting age. It also follows the launch of a new online portal to request absentee ballots created by the secretary of state that several clerks criticized as lacking appropriate safeguards.

“The secretary’s actions have been detrimental to us on many different levels — budgetary; voter confidence; failure to communicate; and, now a blatant disregard for the way we process absentee voter applications,” said Flint Township Clerk Kathy Funk, a Democrat who also serves as the president of the Genesee County Clerks Association. “There is no rhyme or reason for the measures being taken — at least not from our standpoint. Secretary Benson is not aligning herself with the clerks on the frontline conducting elections. We cannot even get the simplest of questions answered.”

The Genesee County Clerk’s Association, which includes all 35 clerks in Genesee County, sent a letter to Secretary of State Jocelyn Benson’s office recently criticizing it for a lack of communication with clerks and calling the mailing a “costly waste” to taxpayers at a time when clerks need additional financial support associated with the COVID-19 pandemic.

Oxford Township Deputy Clerk Susan McCullough submitted written testimony that called out Benson for implying the state had provided local clerks with signature verification software, which she says has not happened.

“The secretary of state said on the Frank Beckmann Show that ‘we’ve actually invested in signature matching software for the first time to verify and ensure everyone’s using the same technology to verify the accuracy of these signatures.’ Listeners were led to believe that we are currently using this software,” McCullough said. “When I requested a copy of not only the above-referenced software, but a copy of the law allowing the use of such software, I was told by the State Director of Elections Jonathan Brater that ‘Michigan does not currently have access to signature matching software.’ I feel that voters were certainly misled by this statement.”

Johnson said that sending absentee ballot applications has always been the job of local clerks, and it has long been the precedent in Michigan that applications are not sent without a request from voters.

“It was awkward because 62,000 people who did not request applications received them prior to 16,000 people who had,” said Livonia City Clerk Susan Nash, referring to the fact that Benson’s mailing excluded voters who had already requested to be on local clerks’ permanent absentee lists. “It has caused a huge backlog of work in the midst of a pandemic. It would have been nice to have a heads up of more than 24 hours that something like this was about to happen.”

“Why would the state mail applications to voters that have moved out of the state and were flagged in the voter software as surrendering their Michigan driver’s license?” said Cass County Clerk Monica McMichael in written testimony to the committee, referring to Benson’s decision to include individuals flagged by the state as likely no longer living in Michigan in its mass mailing of absentee ballot applications.

Clerks also expressed doubt about the security of the new online absentee ballot application launched by the secretary of state. Johnson has previously raised concerns about the integrity of the portal that pulls in a digital signature file from the secretary of state’s records to affix to the absentee ballot application after answering a few questions.

“I am concerned because the voter submitting this application does not sign the application upon completion digitally, the signature is pulled from the Qualified Voter File and populated onto the application,” said Brighton City Clerk Tara Brown. “Checking the voter’s signature before sending a ballot is a very important step to confirm the ballot being sent is actually to the voter who requested it.”

“We were being told to verify the signatures against themselves,” McCullough said. “This is no verification.”

“Secretary Benson continues to make unilateral decisions that are ill-thought-out, they’re rushed, and most importantly they’re untested,” said Kent County Clerk Lisa Posthumus Lyons. “A presidential election cycle is not the time to be throwing spaghetti at the wall and seeing what sticks here.”

Buchanan Township Clerk Sheila Reitz, who had driven over two hours during a busy time for her office to be at the committee hearing, complained that she sent numerous emails seeking guidance on changes being made for the upcoming elections with no response.

“The only time I received an answer from [Benson’s office] was when I copied two senators and two representatives on my email stating my frustration, then I started getting answers within a few hours” Reitz said. “The secretary of state has an obligation to communicate with the local clerks.” 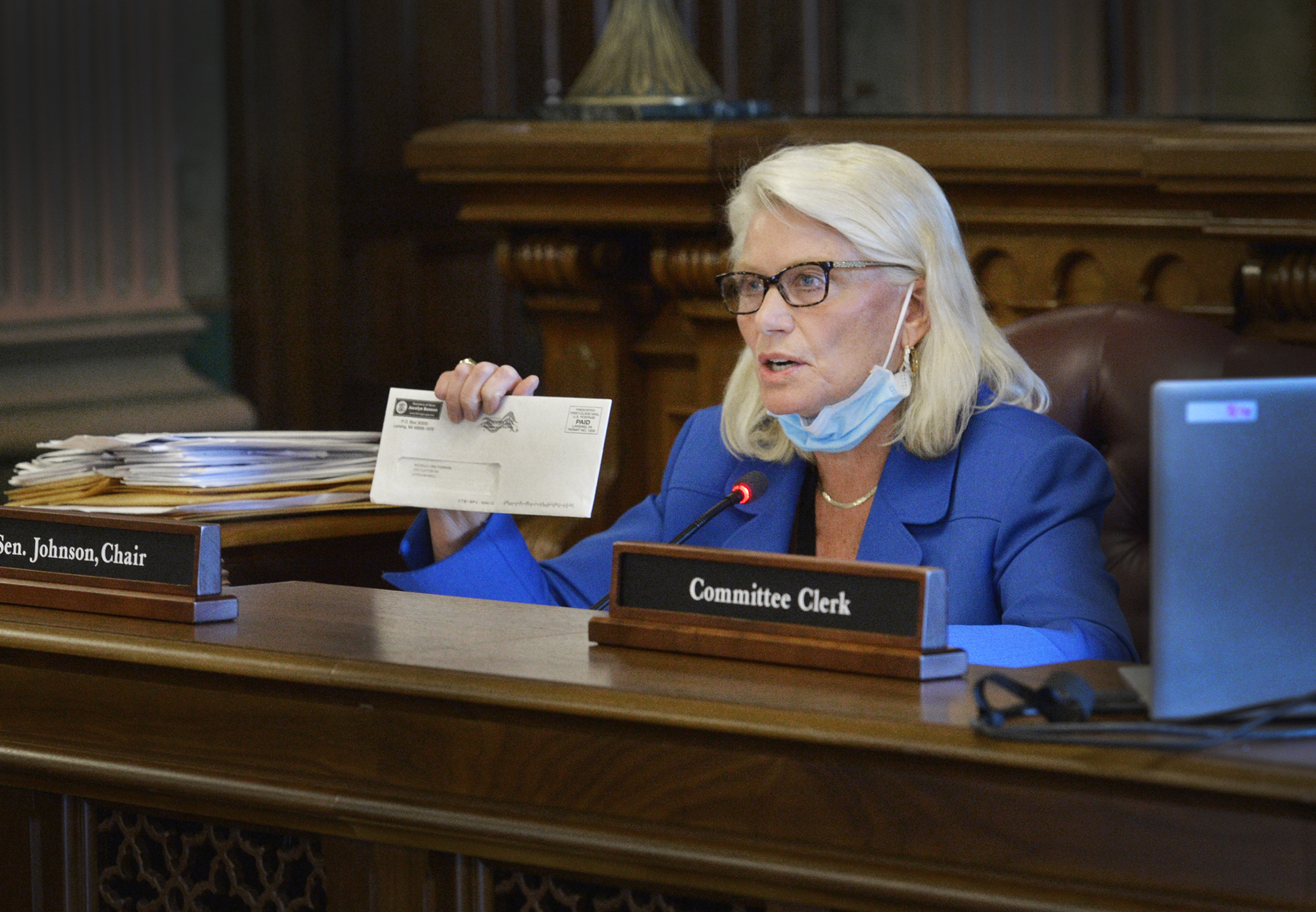 The above picture is available by clicking on the image or at https://www.SenatorRuthJohnson.com/photos/.