LANSING, Mich. — The Senate Elections Committee on Wednesday questioned Secretary of State Jocelyn Benson about critical elections issues and concerns they have heard from local clerks across the state.

“I have long supported secure, no-reason absentee voting. Everyone in our state has the right to cast their ballot absentee by mail or deliver it to their local clerk, and I think most would agree this is a good option during the current COVID-19 pandemic for people who want to use it,” said Sen. Ruth Johnson, R-Holly. “But it is the job of local clerks to handle absentee ballot requests, and the state should not be sending prefilled applications to people who are dead, have moved out of the state, or are noncitizens.”

Johnson asked Benson to walk the committee through her process for using $4.5 million in federal COVID-19 funds to issue an unsolicited, statewide mass mailing of absentee ballot applications. She cited hundreds of examples where people who have moved or died, sometimes decades ago, received a letter and absentee ballot application filled out inviting them to request a ballot.

“My team and I put a lot of effort during my time as secretary of state into cleaning up the voter rolls,” said Johnson, who served as Michigan secretary of state from 2011 to 2018. “We try to keep the Qualified Voter File as accurate as possible, but we know it is far from perfect and flawed, which is one reason it has never been used and should not be used as a mailing list for absentee ballot applications.”

Benson acknowledged her department could have better used the mailing to help clean up the Qualified Voter File. Johnson pointed out that return service was not requested on envelopes, nor was there any language requesting the return of applications sent to individuals who do not reside at the mailing address. The mailing did little to clean up the voting roles but opened up the process and invited nonqualified voters to vote.

“You’re right; perhaps we could have done it better,” Benson told Johnson about the statewide mailing during the hearing. “We would certainly like your partnership in helping us ask citizens receiving applications for other people to return those to us. And then we forward them on to local clerks to enable their verification (that the individual is not an eligible voter) and removal.”

Benson answered that her mailing had been sent to people the state believed might no longer live in Michigan and whose names are in a “countdown” file to be removed from the voter rolls after being informed they vote in another state but are still registered in Michigan. However, federal law requires them to be retained on a subset countdown list for two federal election cycles before removal. Johnson referenced cases where people who moved in the last 12 to 18 months got an application forwarded to them in another state, where they currently vote.

“Secretary Benson’s unilateral actions open the opportunity for those to vote twice because there is no system in Michigan to detect people double voting when people vote in multiple states,” Johnson said. “We had cases when I was secretary of state where people were voting in Michigan and Florida. But we only caught those cases because they were claiming a homestead exemption in both states. When the treasury department looked at where they were voting to determine the homestead, they found some people were voting both places.” However, this was several years after the elections.

Johnson also said the Electronic Registration Information Center, the interstate system used by the secretary of state to check for voters who may have moved out of Michigan, misses many people that should be removed because 40% of states do not participate in the voluntary program, including large states such as California and New York.

The Genesee County Clerk’s Association, which includes all 35 clerks in Genesee County, recently sent a letter to Benson’s office criticizing it for a lack of communication with clerks and calling the mailing a “costly waste” to taxpayers at a time when clerks need additional financial support associated with the COVID-19 pandemic.

Benson confirmed spending $4.5 million of coronavirus-related federal funding for the mailing, but she said her department did spend $2 million of the funding on personal protective equipment for local clerks and election workers for materials such as masks and gloves.

“There is a sanctity of the signature itself which verifies and validates,” said committee member Sen. Pete Lucido, R-Shelby Township. “Where do you get authority for the online application when the law says an applicant for an absentee ballot shall sign the application? We had clerks testify that they were not comfortable with the new application because it is not signed by the voter.”

In previous testimony before the committee, Brighton City Clerk Tara Brown said, “Checking the voter’s signature before sending a ballot is a very important step to confirm the ballot being sent is actually to the voter who requested it. We are being told to verify the signatures against themselves.” 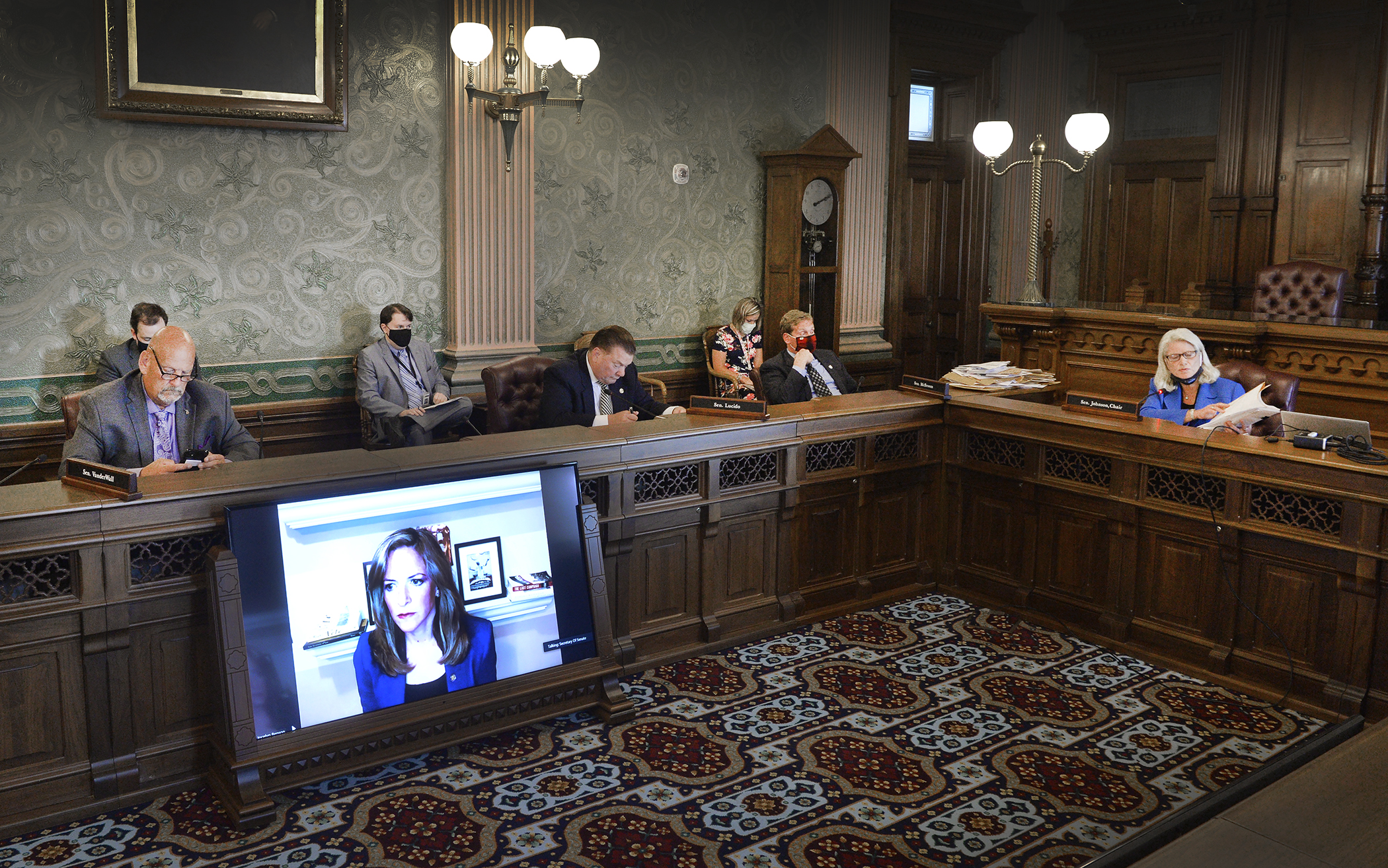 Editor’s note: The above picture is available by clicking on the image or at https://www.SenatorRuthJohnson.com/photos/.